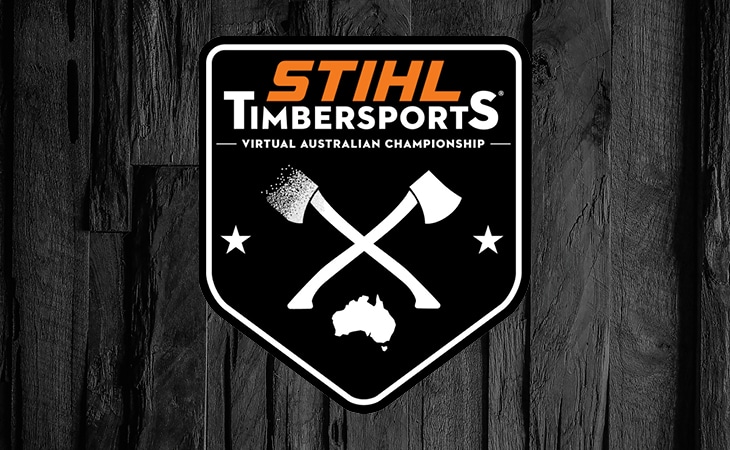 Woodchopping as a professional sport originated in Australia over 100 years ago, and since then, the STIHL TIMBERSPORTS® series has injected its own modern day twist on the original extreme sport, combining traditional woodchopping and sawing techniques with the high energy, high adrenaline, blood pumping action that fans have come to know and love about live sports in the 21st century. 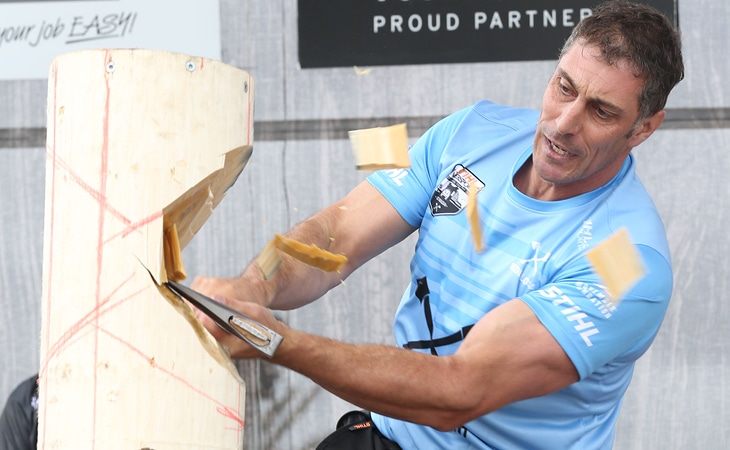 Since its inception in 1985 national STIHL TIMBERSPORTS championships have been held across the world in 23 countries annually, giving budding athletes the chance to qualify for the World Championships. However, with the COVID-19 pandemic restricting travel not only internationally, but locally too, this year, the Australian Championship is taking another leap into the future with the launch of the worlds’ first virtual STIHL TIMBERSPORTS® Virtual Championship.

The STIHL TIMBERSPORTS® fan base here in Australia has grown exponentially over the past few years with hundreds of thousands of fans tuning in each week to watch the TV series on 7mate. Keen fans also make the journey to catch our athletes live in action, travelling from every corner of country to cheer on the likes of Brayden Meyer, Laurence O’Toole and Brad De Losa.

After a great first event for 2020 in March on the foreshore of Melbourne’s iconic St Kilda breach, the next event planned for August 17th at the the picturesque location of Glenelg in South Australia had to be cancelled due to the number of restrictions on place as a result of the COVID-19 pandemic. While the STIHL TIMBERSPORTS series was hoping to make a return to a physical stage in 2020, continued border closures forced the series to think outside the box to ensure its growing fan base still had the chance to see their favourite athletes compete once again in 2020. So, it was then that the plan to hold the world’s first virtual STIHL TIMBERSPORTS® Championship was born. 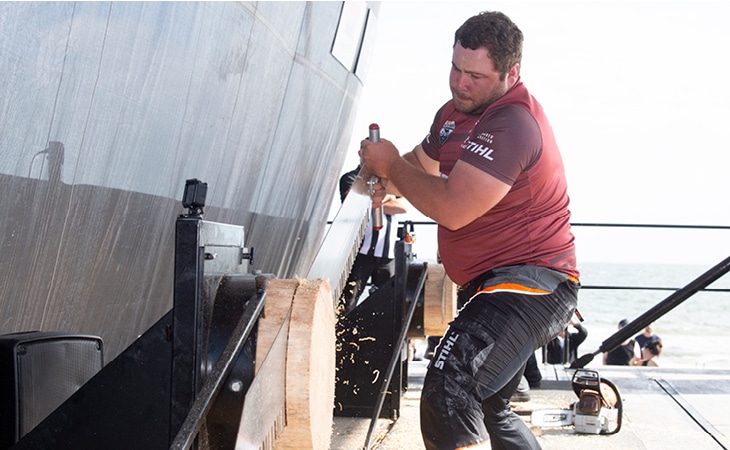 You might be wondering how athletes will be watching and competing at the same time. STIHL TIMBERSPORTS® Event Director, Lee Gooch, explains. ‘As with a number of multiple location “live” broadcasts during the pandemic, show filming will take place across the country during the week prior. This way, we can ensure issues such as network connectivity and unexpected disruptions don’t ruin our fans viewing experience. I think we’ve all been on enough video calls the past few months to know even a one-on-one conversation doesn’t always go to plan, let alone coordinating four locations to all start a race at the same time! Our aim is to deliver the same experience that our fans are used to in person live and on 7mate watching the TV series, so although the disciplines won’t be live, what will be live is the journey through to completion and the final result”.

Many measures have been put in place to ensure that the final result isn’t leaked beforehand, and that our fans receive an experience as close to the real deal as humanly possible. As you may know, the STIHL TIMBERSPORTS® national championships consist of six disciplines, three with axes including the underhand chop, the standing block chop and the spring board, and three with saws, including the singlebuck, the STIHL Stocksaw the fan favourite Hotsaw. 12 athletes will participate, and will be awarded points based on their times, so the fact that athletes are in different states competing on different days will not have an effect on the end result. Times at each of the four locations will all be managed through video technology capable of measuring to 1/120th of a second and judges will be under strict orders not to share the times with the athletes ensuring the result is a mystery to everyone involved, including the athletes.

Finals times and the event footage from each location will then be sent to the STIHL TIMBERSPORTS® global team in Munich, Germany, where the competition will be pieced together in the Bavaria Film Studios, a location the global team have utilised during the pandemic to hold a number of the European nation’s national championships under strict COVID safe guidelines. The film studios in Munich are also the proposed location for the World Championship, but with the case numbers rising in Europe daily, it is unknown whether it will still be possible to go ahead. One thing is for sure, Australian and New Zealand Athletes will not be taking part due to the international travel restrictions which means the gold medal will be heading to a new country for the first time in over 15 years, the last two of which going to Australian duo Laurence O’Toole in 2018 and Brayden Meyer in 2019. 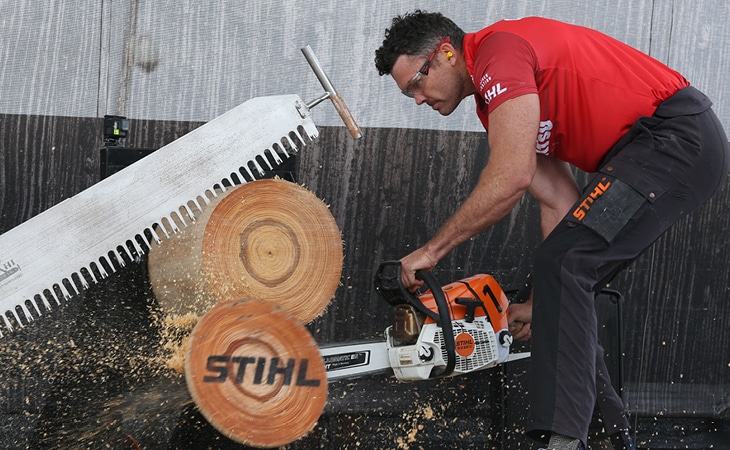 Whilst the competition will be pieced together in a TV studio, Event Director Lee Gooch went on to explain that there will be no manipulation of results to craft a winner, as is the skepticism of viewers for many TV shows. “Every effort has been made to ensure a fair result and athletes receive the same conditions and experience as a non-virtual championship. The main variable in STIHL TIMBERSPORTS® is the wood and the team have taken extra steps to ensure the wood is as expected at all our competitions”.

All is fair in TIMBER and SPORT

For the TIMBERSPORTS® newcomer, the wood used in STIHL TIMBERSPORTS® competitions is sourced from plantation timber regrowth forests in New South Wales. All wood is poplar except in the single buck where pine is used due to its cleaner properties and suitability for the razor sharp manual saws. The wood used in each of the six different disciplines is from the same tree or trees that have grown side by side. Once felled they are cut down to length and then placed in a lath to remove the bark and reduced to the correct diameter for the discipline. It’s then wrapped in plastic to ensure the moisture is retained, otherwise the logs wood dry out and split. Being a natural product, no two trees or even section of the same tree is identical. It can sometimes be luck of the draw whether you get a good log with no imperfections or a bad log that was a hidden knot or section with compacted fibers that will be harder to cut and could even break the razor sharp axes. 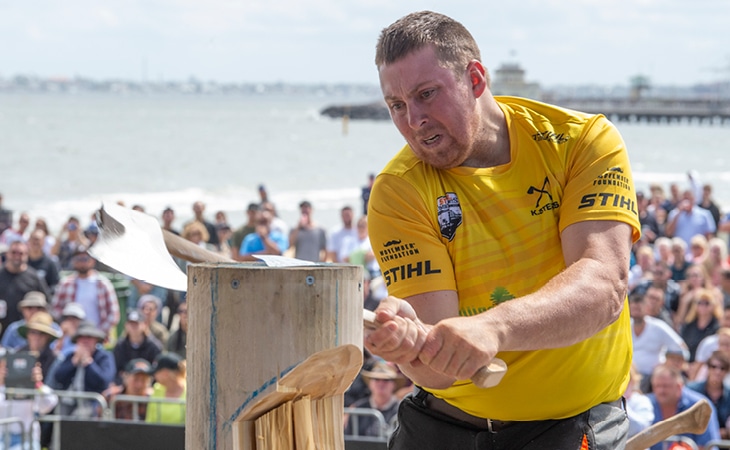 In charge of the wood at events are Australian Sports Director, Shayne Maxwell, and Head Judge, Neal Richardson. It is their job to ensure the wood is as evenly matched as possible and any blocks with visible imperfections are removed.  Shayne Maxwell explains. ‘The wood draws at STIHL TIMBERSPORTS® competitions are intense affairs. All the blocks are numbered and drawn for out of a hat. Once the blocks have been drawn, the athletes are allowed to start setting them up. They don’t let them leave their sights in fear someone might tamper with their block. So, to conduct the wood draw weeks ahead of time and then ship the wood to each location, extra care has been taken to ensure there is no skepticism or potential for misconduct. All the wood has been pre-sorted by Neal himself, after which it will then be shipped to STIHL Headquarters for a second check before the wood draw is conducted via video call with all the athletes in attendance. Once drawn the blocks are named for each athlete and security sealed by Event Co-Ordinator, Renee Kitto, they are shipped to the Judges in each of the states who will then need to keep them under lock and key until each individual competition date’.

Selection for the Virtual Championship is based on each athlete’s performance at the 2019 Australian Championship; with nine spots awarded to the top ten place getters. The only exclusion has been veteran Matt Gurr who will be overseeing the Tasmanian Competition in conjunction with the STIHL TIMBERPORTS two-time Australian Women’s Champion, Amanda Beams. Three further wildcard spots have been awarded to up and coming stars of the sport with the past three Australian Rookie Division Champions added to the rooster.  Whilst the usual prize of a ticket to the World Championships in Europe is off the table, the $30,000 prize pool will be fiercely contested. Despite the complete halting of the wood chopping competitions across Australia, reigning World Champion Brayden Meyer and 2018 World Champion Laurence O’Toole are the favourites to win, but the other ten athletes will surely have other plans and think this could be their chance to take a championship victory, even if it is a virtual one!

With three athletes competing in each state, four locations were selected to host them. Unfortunately STIHL TIMBERSPORTS® does not have the same luxury of some other sports such as football where ovals or pitches frequent every suburb and city on mass. Wood chopping requires custom made robust metal stands to be secured to withstand the force of the powerful athletes safely.  So, do not expect to see the usual giant rock concert-esque stage at each location. In 2020, we are going back to basics, in to the backyards of the athletes, but with a little sprinkling of TIMBERSPORTS® styling and flair. 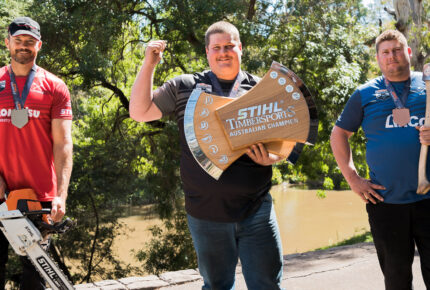 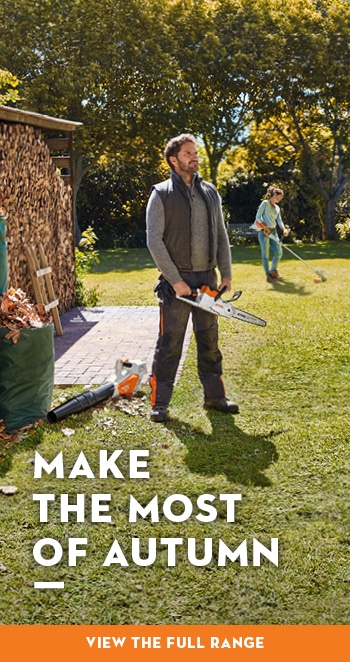